PIZZA DEBACLE FUCK UP On Tripadvisor 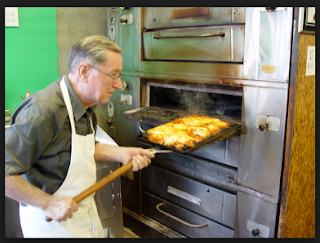 TripAdvisor makes a major Faux Pas when with their Top 10 Pizza Cities of U.S.  The Faux Pas, TripAdvisor puts the "Undisputed Raining King of American Pizza 4th" and as if they are even more out of their minds rank San Diego # 1, Las Vegas # 2, Boston # 3, and The Champ New York # 4  ... It doesn't take much of a Genius to realize that this is one of the 21st Centuries biggest Media Blunders of all. So bad in fact, "It's a Joke," an absurdity that is beyond belief and has "Seriously Hurt TripAdvisor" and given them a major Credibility Issue.  A business that is built on credibility and giving "Advise" as per their "Name," TripAdvisor is in TROUBLE ..
Below:  "THIS IS INSANITY" !!!
The Top 10 Cities for Pizza, as determined by TripAdvisor:
At issue here is not whether San Diego, Boston, and Las Vegas has better Pizza then New York and that they have bragging rights. "Hell No!" They don't, anyone in their "Right-Mind" knows that no city can touch New York in their superiority as far as Pizza is concerned, New York is America's undisputed Champ, we have some of the Best Pizza on Eart, and this include Italy. The only city that comes close to New York is New Haven, Connecticut, but even as great as New Haven and the towns pizza is, they are a distant second to New York, Chicago? Fougettabout IT! Chicago, that "Deep Dish Stuff" That's NOT Pizza, it's Deep Dish something, not Pizza. The balance is completely off to be called "real pizza."
The issue here, with TripAdvisor's Major Foul-Up  is when you go to Tripadvisor for "Advise" on Hotels, Restaurants, and other travel related questions to determine what is the best, and for accurate descriptions, opinions, and ratings, "Is Tripadvisor accurrate and reliable? The answer is, "Sometimes," just be careful and look to others like Yelp and articles and other info on places you are seeking accurate info and advice about. Don't solely count on TripAdvisor. This "Pizza Debacle" is a major "blunder" and one that will take Tripadvisor a good long time to recover from.

Posted by xpicassox at 1:56 PM