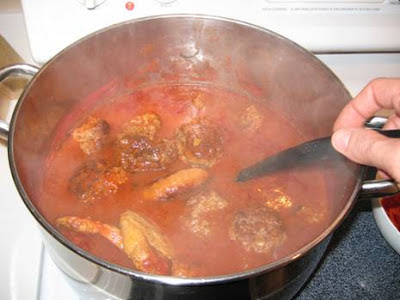 The aroma of a garlic-laden tomato sauce spiked with sausage, meatballs, and rolled-up meat Braciola can bring tears to the eyes of many Italian-Americans.
Sunday gravy, also known as Sunday sauce, evokes memories of weekend family gatherings in which mom or grandma presided over the constantly stirred pot of sauce and meat, and various relatives were tasked with procuring the essential provisions—the cannoli and sesame bread from the bakery or the wine from the cellar.
Sunday gravy was more than just a big, belt-loosening meal. In close-knit Italian-American homes, it was a virtual religion. “Each Sunday, we were constantly traveling to homes of different relatives,” says John Mariani, a New York food author whose books include How Italian Food Conquered the World. “It truly was a moveable feast.’’
The proprietors of Frankies Spuntino restaurant in Brooklyn, Frank Falcinelli and Frank Castronovo, write that “Sunday sauce—the meal, the menu, the way of life—is the source and summation’’ of their restaurant business.
They recall how on Sundays their family kitchens would “start to fill with that hunger-inducing humidity, the tomato and pork simmering away in the pot.’’
Castronovo remembered that Sundays “even when I was a teenager and wanted to be a punk … I’d still stop and eat at my grandma’s house before the rest of the day went down.”
The best Sunday gravy simmers on the stove for hours, permitting the ingredients (the meat choices are seemingly limitless) to infuse the sauce with an unparalleled meatiness that no quickie marinara could ever hope to replicate. The long, slow cooking time was also time for families to spend with each other, reinforcing ties that could withstand the harsh realities of the outside world.
In a way, the history of Sunday gravy encapsulates the story of Italian immigration to the U.S. and the prosperity succeeding generations found in America. “Very, very impoverished Southern Italian women, whose only reason for living was giving birth to children and feeding them, suddenly found an abundance of cheap food in the U.S.,” Mariani says. “It radically changed their self image.”
The meats in the sauce became a symbol of plenty. Meat had been a rarity in the old country, and if there was any of it at all in a meal, it was usually pork. But in the U.S., immigrant women bought beef “because they could,”
Along with the other staples of Italian-American cuisine, Sunday gravy has vaulted from family food to the culinary mainstream, even as a once-in-a-while treat for today’s health-conscious eaters. TV food stars Rachael Ray and Giada De Laurentiis regularly feature touched-up variations on the classic Italian-American repertoire. And, although “The Sopranos” is widely despised by Italian-Americans for its twisted depiction of their cherished family values, the show often featured sumptuous Sunday meals with pots and pots of sauce, meat, and pasta—and the cookbook spawned by the show features a Sunday gravy recipe.
For better or worse, 21st-century America has made celebrating the Sunday tradition much more difficult for families. “Sunday is now a time for attending soccer games, getting in 18 holes of golf … or watching three NFL games without interruption,” Mariani says.
But Mariani and other Italian-American food advocates nevertheless remain intent on keeping tradition alive. “My family still gets together on Sunday afternoons just as it always has, and the food is as good as it ever was,” Falcinelli wrote in The Frankies Spuntino Kitchen Companion & Cooking Manual. “Growing up, I didn’t see it as an amazing culinary tradition, but I did appreciate how good the eating was.”

Posted by xpicassox at 10:11 AM No comments: 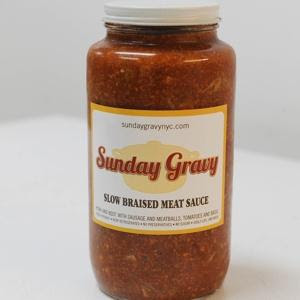 Mamma mia! That’s a lot of money to mangia.
At $35 a jar, Sunday Gravy is the most expensive pasta sauce in town — and the price tag is giving some people agita. “You’re kidding me, right?!” belched one Facebook poster. “Who in their right mind would pay $35 for sauce?”
The ruby-red delicacy costs far more than celebrity blends made by Mario Batali ($7.80), Lidia Bastianich ($6.80) or Rao’s ($8).
And it’s more than double the $16 for a plate of pasta with meat sauce at Eataly’s La Pasta or even a $22 penne with veal and pork ragu at Il Buco.

IF YOU THINK THIS IS An ABSURD PRICE and WANT TO MAKE YOUR OWN TASTY ITALIAN SUNDAY SAUCE GRAVY alla CLEMENZA alla FRANK SINATRA
GET YOURSELF A COPY of DANIEL BELLINO-ZWICKE'S AWESOME BOOK
"La TAVOLA" ITALIAN-AMERICAN NEW YORKERS ADVENTURES of THE TABLE
With MANY GREAT RECIPES INCLUDING SUNDAY SAUCE alla CLEMENZA, THE WAY FRANK SINATRA LIKED IT ... MANGIA!!!

MAKE YOUR OWN SUNDAY SAUCE For MUCH LESS, RECIPE In "LA TAVOLA"

Posted by xpicassox at 9:54 AM No comments: 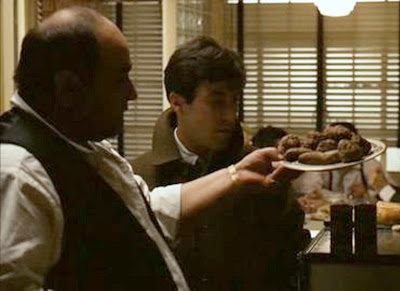 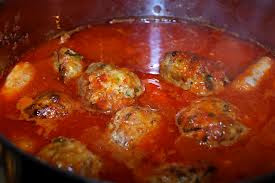 Posted by xpicassox at 9:46 AM No comments: 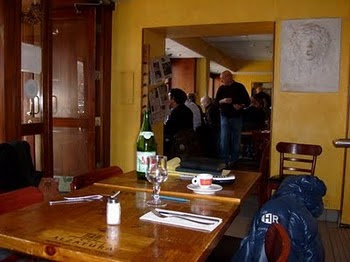 When it comes to great Italian Food, in a city (New York) that is known to have the Best Italian Food in the World outside of Italy, it's hard to beat Bar Pitti, which is why Bar Pitti may very well be the "Best Italian Restaurant" in New York City! Yes!
Wait a minute, scratch that "maybe." No, Bar Pitti serves without a doubt, thee "Best Italian Food in New York." You don't think so? name one that is better. And please only qualified people please. No followers or Hack Food Critics like
Frank Bruni.
Who could compete? Maybe Babbo, Del Posto, Elio's, Lupa. They are all good, but none as good and consistent as Bar Pitti.
Il Mulino is absolutely "Aweful!" An "Overpriced Lackluster Restaurant" with horrible ambiance, mechanical annoying service, and food that is merely good, and no better and insanely "High Prices." It's a place for "Followers" who run with the crowd and wouldn't know real good Italian Food if it came up and Bit Them in The Ass.
Babbo many would say. Well Babbo is quite good, but just can't hold up to Bar Pitti with more of a true Italian feel, great food at truly real Italian Prices. Babbo is a great Special Occasion restaurant, but for everyday eating, Babbo doesn't even come close to Bar Pitti for "Great Quality Price Ratio," and even not considering the prices, if they were the same, though the food at Babbo is very good and I've had a few very enjoyable meals there, I have been disappointed a couple of times, something that has "Never" happened to me at Bar Pitti and I've eaten there more times, yet never been disappointed, not once, and always had a great time. So even if the prices were the same, Bar Pitti still has an edge, with Better More Consistent Authentic Italian Food than Babbo.
How bout Maialino, Laconde Verde, Osteria Morini, and others? As MC Hammer would say, "Can't Touch This."
So if you're looking for Thee "Best Italian Food in New York" there's one name, "Bar Pitti." 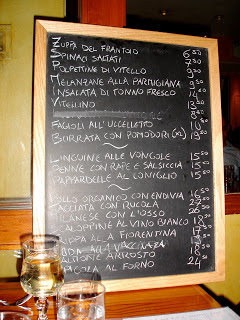 SPECIALS BOARD BAR PITTI
IT'S THE WAY To GO!

Posted by xpicassox at 9:12 AM No comments: